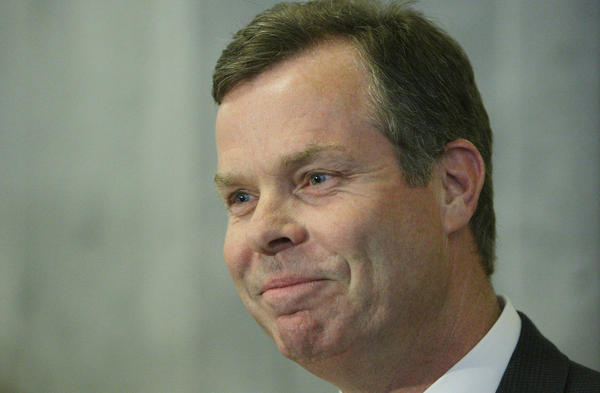 SALT LAKE CITY — A judge in the U.S. District Court of Nevada ruled Wednesday against federal prosecutors who sought to delay the civil case against Jeremy Johnson and his fellow defendants connected to the St. George online marketing company iWorks.
The decision leaves open the possibility that Utah Attorney General John Swallow could be subpoenaed in the case in the next six seeks, the timeframe given to complete depositions in the case.
Federal prosecutors in Utah had sought to halt the case, saying it could “wreak havoc” on parallel criminal proceedings against Johnson, iWorks and four other former iWorks employees in Utah’s Federal District Court.
But the iWorks defendants argued that would unfairly delay their case, perhaps for years, and they want to pursue depositions and other "discovery" in the case and clear their names.
“This is about getting into court. It’s about letting people see the true story. The government doesn’t always get it right,” said attorney Karra Porter, who represents iWorks in the Nevada civil case.
“Now the parties can move on and get a trial date without having to wait years,” she said Wednesday.
In her ruling, Nevada Judge Miranda Du wrote, “[T]he Court is mindful that it was the government’s decision—not Defendants’—to bring both (lawsuits) simultaneously.”
The Nevada civil suit against Johnson and his fellow defendants was brought in December 2010, while the Utah criminal case was filed roughly six months later, in June 2011.
In the civil FTC complaint in Las Vegas, the FTC contends iWorks bilked online customers of nearly $300 million. The 86-count criminal indictment in Salt Lake City alleges fraud.
The parallel cases have witnesses, facts and legal issues in common, which prompted a motion in April by government lawyers to halt the civil case while the criminal case proceeded. Du ruled on the motion Wednesday.
Johnson, who is acting as his own attorney in the Nevada case, as well as Porter, who represents iWorks and the majority of its defendants, can now resume depositions, which allows them to interview witnesses under oath in the presence of attorneys.
Johnson previously has sought to depose Swallow in the case, claiming in court documents, “[Swallow] became exceptionally well-versed in the dealings and details of the iWorks’ operations and the company’s fervent efforts to not just be in compliance with the law, but be leaders in the online marketing industry.”
Evidence submitted by Johnson to support the claim includes an email in which Swallow appears to be pitching joint ventures with iWorks, namely a payday loan marketing plan and a Cash for Gold project.
Swallow’s attorney, Rod Snow, has previously said the ventures never materialized and that Swallow had never intended to profit from the deals, but was only trying to connect his friend and former boss, Check City owner Richard Rawle, with iWorks marketing operation.
Neither the U.S. Attorney’s Office for Utah or Nevada were able to be reached for comment.

Posted by Unknown at 9:23 PM No comments:

An internet marketing millionaire from St George, Utah, has been accused by the Federal Trade Commission of being the 'mastermind' behind one of the biggest cases of online marketing fraud ever perpetrated in America.
Jeremy Johnson, 37, has become known in his native Utah for his selfless acts of heroism, including mounting his own relief mission to Haiti after the earthquake in 2010, and literally giving the shoes off his feet.

But according to the FTA, the money Johnson has so generously donated wasn't his to give, and had in fact been amassed by luring online customers with promises of free CD-ROMS for which they only had to pay a nominal shipping fee. These customers' credit cards would then be charged for recurring monthly memberships they hadn't agreed to and weren't aware of.

Over a five-year period, the company of which Johnson was founder and CEO, I Works, allegedly stole more than $275 million from customers, and discouraged them from seeking compensation from their credit card companies by threatening to report them to a website called BadCustomer.com - a site run by I Works.
And while Johnson's philanthropy was well-known, his lifestyle was not exactly humble. According to The New York Times, he owns a 22,000-square-foot home in a gated community in a St. George suburb, a 1957 Chevrolet Bel Air and other classic cars, houseboats and helicopters. His case files contain statements from witnesses alleging he 'amassed bundles of cash and buried caches of gold'.

It's a fall from a great height for the six-foot-tall, red-headed Johnson, who appeared to be casting himself into the 'affable millionaire' mold by rescuing stranded mountaineers in his helicopter and housing people fleeing from Utah's polygamous communities.

'When I think of Jeremy Johnson, I think of the most generous person I ever met,' Daniel Gardner, an assistant loan officer in Provo, Utah and friend of Johnson, told The New York Times. 'Whatever he had, he would give and give and give.'

Gardner described Johnson, who he met as a boy scout, as 'one of the most Christ-like people I have ever come to know.'

Philanthropy: Here, Johnson works to provide aid for people affected by the Haiti earthquake in 2010

In addition to the FTA investigation, Johnson and five of his associates are now facing 86 related criminal charges, including making false statements to bank, wire fraud, bank fraud, engaging in fraudulent banking activities, conspiracy to launder money and money laundering brought by the United States attorney in Utah.

Johnson categorically denies any wrongdoing in both cases. According the the Times, court filings by his lawyers say the FTC's case is 'filled with half-truths, distortions and inflammatory rhetoric that is not supported by the evidence.'
According to The Salt Lake Tribune, the company allegedly set up 80 'shell accounts' to accept payments without being detected.

'They had no employees, they had no office locations, they were mail drops,' Collot Guerard, the lead FTC attorney on the lawsuit, told the Tribune.

'They were essentially fronts, and they didn't have any substance to them other than lending their name to obtain a new merchant account when Jeremy Johnson and I Works were no longer able to get merchant accounts.'

Johnson's business offered customers catalogs of government grants and information about how to apply for them. Once someone signed up for a catalog, to be delivered via main on a CD-ROM, they were then given one week to cancel their membership, after which they were signed up for membership to various different programs which all charged a monthly fee.

Denial: Johnson has denied any wrongdoing in the case against him, in which he allegedly swindled more than $275 million from unwitting consumers
This is legal - if the marketing material makes full disclosure to the customer and the customer consents.
But according to federal prosecutors, I Works-affiliated sites often displayed disclosures in very small print, and sometimes didn't disclose the information at all.
According to The New York Times, the FTC began investigating I Works in 2009 after Visa noticed an ever-growing number of customers wanting to reverse charges for online membership programs, called a 'chargeback'.
It was difficult at first to link the chargebacks to I Works, since the company was operating under so many different names and so many different programs, including Easy Grant Finder, Bottom Dollar, Business Funding Success, Fast Gov Grants, Cloud Nine Marketing, CPA Upsell Inc., Employee Plus and many, many more, according to court papers.

I Works was closed after the charges were brought, but according to prosecutors, Johnson transferred many of his assets, including gold bullion and his home, into the names of his parents and his wife, Sharla, who have now been named as 'relief defendants' by prosecutors for receiving ill-gotten gains.

Johnson went on the offensive after being indicted. According to The Salt Lake Tribune, he launched an online campaign to clear his name. He accused federal prosecutors of threatening to indict his family if he doesn't plead guilty in his criminal case and accused a FTC attorney of tampering with witnesses in YouTube videos, created an EvilFTC.com website which he promoted on Twitter, made a Facebook page where people can make negative comments about the United States Attorney for the District of Utah and conducted interviews with reporters in which he reiterated the points he's made online.

Federal prosecutors grew weary of this and a federal judge granted a gag order against Johnson and his associates to prevent them from commenting publicly about the case.

According to the Tribune, Johnson has been arrested twice since he was charged in 2010: 'once in a Phoenix airport attempting to leave the country en route to Costa Rica, a few months after receiving a federal indictment for mail fraud' and again 'in Washington County for an outstanding Nevada warrant, which was issued after he bounced several bad checks meant to cover more than $100,000 in gambling losses at a Las Vegas casino'.

The FTC case against Johnson in the District Court of Nevada is ongoing, and the criminal charges against him will be pursued at its conclusion.

UPDATE: The Jeremy Johnson Case Blows Up Worldwide.. I wonder how that happened? New York Times

UPDATE: The Jeremy Johnson Case Blows Up Worldwide.. I wonder how that happened?  From The New York Times, Posted by Robert Paisola, Western Capital Media USA